Cyclones and climate change: what do we know? The case of Cyclone Batsirai

Tropical Cyclone Batsirai has left Madagascar after killing dozens, displacing tens of thousands and devastating the island’s agriculture, already suffering from drought hard hitting a vulnerable population1, Unicef said, adding that many of the victims are probably children, who make up more than 50% of Madagascar’s population. Batsirai hit eastern Madagascar with a Category 3 strength on the evening of Saturday 5 february 2022, bringing heavy rains and winds of 165 km/h. The city of Mananjary in the east of the country “has been completely destroyed”, one of its residents said. This new storm occurred in the wake of Tropical Storm Ana, which recently killed 55 people. Given that we already live in a world of 1.2°C global warming, such extreme events immediately raise the question of whether and to what extent climate change has altered the likelihood and intensity of these devastating storms. Here we briefly summarize the current scientific knowledge on such links.

Tropical cyclones formation: tropical cyclones develop over ocean basins from large-scale tropical circulation disturbances and waves generated by atmospheric dynamics. Through enhanced convection these disturbances can self-organize into tropical storms under conditions of weak vertical wind-shear. When fuelled by high sea surface temperatures (SST), these storms can quickly escalate into cyclones with sustained winds exceeding 120 km/h. Strong cyclones can only develop when SSTs reach very high values such as 27-30°C. The complexity of mechanisms  describing tropical storm development leave projections of cyclones under climate change poorly understood. The Western Indian Ocean, Madagascar and the South-Eastern coast of Africa; as well as islands like the Réunion or the Mauritius islands are regions prone to cyclones formed in the Indian Ocean.

Tropical cyclones (TC) are among the extreme events for which the change with global warming are the most difficult to establish. The reasons for this are numerous: (i) The lack of a satisfying theory for cyclogenesis, (ii) the short time span of reliable observations (typically a few decades), (iii) the confounding influence of interdecadal variability and other drivers such as aerosol changes and (iv) the difficulty of simulating TC in state-of-the-art global climate models, because of their coarse resolution. Despite the relatively short record of observations available some conclusions can still be drawn (Knutson et al., 2019). Because of different trends in different regions it is hard to conclude on a global trend in TC frequency. However, IPCC’s AR6 WGI (Chapter 11) noted that “It is likely that the proportion of major (Category 3–5) tropical cyclones (TCs) and the frequency of rapid TC intensification events have increased over the past four decades”. Moreover, the latitude of the peak intensity has shifted poleward (Kossin et al., 2014). Heavy precipitation associated with TC is also increasing with high confidence. The decrease found in TC translation speed (Kossin, 2018, IPCC’s AR6) also acts to potentially compound increasing precipitation amounts.

Studies attempting to assess the human influence on trends in cyclone intensity (in terms of wind speed) have been  relatively inconclusive. Some studies have shown a role of human-driven climate change in cyclone extreme rainfall, but those generally have not focussed on  the Indian Ocean (AR6 IPCC, WGI, Chapter 11). Despite this, the IPCC AR6 report recognizes stronger support for observed TC changes and their attribution to human influence.

For future projections, the IPCC AR6 report states that “the proportion of category 3-5 tropical cyclones is expected to increase (high confidence), but the total global number of tropical cyclones is expected to decrease or remain unchanged (medium confidence)”, and that “there is high confidence that average peak TC wind speeds and that peak winds of the most intense TCs will increase with increasing warming”. However there is confidence in trends of TC-related risks. Knutson et al. (2020) highlighted consequences in order of certainty: i) because of sea-level rise, storm surges will become more impactful; ii) TC precipitation rates will increase, iii) The proportion of intense TC among all TC will continue to rise. There is also growing concern about the increase in windstorm risks associated with ex-tropical cyclones moving into mid-latitudes (Haarsma, 2021).

Fewer studies have focused on the western Indian Ocean and South-East Africa, but one study has shown an upward trend in Category 5 cyclones. Thus there is limited confidence in the assessment of cyclone changes and the role of human activities. For future conditions projections from models give a clearer picture. The IPCC’s AR6 (Chapter 12) has concluded that for the mid 21st century, and for scenarios reaching about 2°C of global warming above pre-industrial levels, “there is a projected decrease in the frequency of tropical cyclones making landfall over Madagascar, East Southern Africa and East Africa (medium confidence)”, but also that “over Western Africa and Southern Africa, a future statistically significant increase in wind speed and wind energy potential is projected (medium confidence)” (AR6, WGI, Technical summary).

Cyclones in Europe: In Western Europe tropical cyclones can hardly reach the Atlantic coasts with a tropical structure (warm core), while they do hit Portugal, France, Ireland and the United Kingdom in the form of post-tropical depression, i.e. hurricanes which have changed their dynamical characteristics because of their northward shift.  Only a few hurricanes kept their tropical characteristics while reaching Europe: hurricane Chloe 1967 which made landfall in France with Category 2 winds, Hurricane Vince in 2005, which struck southwestern Spain as a tropical depression; and Subtropical Storm Alpha in 2020. The Mediterranean Basin hosts other kinds of tropical-like cyclones, the so-called “medicanes”, which features a smaller radius and a different dynamics than the tropical cyclones.

Moreover, trends found in observations may depend on the density of observations, and therefore cannot be considered as a climatic signal. However, as in the U.S.A., deep convective structures have a tendency to become more intense with climate change due to warmer surface and sea-surface temperatures and larger atmospheric water content. Severe wind storms in the world regions. For both Europe and North America according to the latest AR6 IPCC regional assessment there is medium confidence of an increase of severe wind storms (not including tropical cyclones) that is the broader category to which tornadoes belong to. 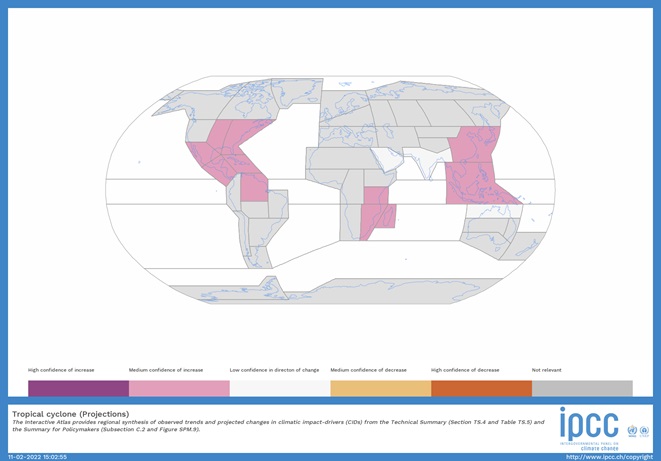 Figure 2. From AR6 WGI IPCC Interactive Atlas: Confidence in the direction of changes for tropical cyclones intensity over all regions of the world from a 2oC global warming level and above.

Cyclones will be studied in project XAIDA. Machine learning techniques will be used to i) adjust the intensity of TCs in reanalyses and models to the observations to have a fair representation of their dynamics, ii) devise efficient tracking algorithm to detect automatically TCs in thousands of year of climate simulations, iii)  increase our understanding of the role of anthropogenic climate change on the occurrence of TCs. 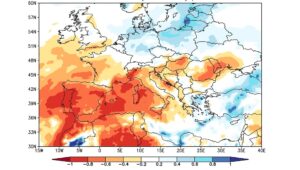